A realistic historical short story based on the historic and devastating 1906 San Francisco Earthquake by Agneya Dutta Pooleery, a fourth grade student in Buffalo, USA.

Photograph of St. Francis Hotel Showing the Clean Sweep of Fire in the Business Section of All Except Class A Steel Frame Buildings (Pic: Catalog.archives.gov)

It was 5:13 AM in the morning. Thomas was sleeping peacefully when he was suddenly awakened by a violent shaking. He sat up. It was early in the morning, and something was shaking? Thomas looked at his clock. For some reason, none of its arms were moving. Thomas decided to investigate. He threw on a jacket, wore his shoes, and headed out the door. The shaking continued, but when Thomas stepped outside, he was terrified by what he saw. Buildings were toppling, people were screaming, and the church spire opposite his house, looked as if it was going to crash down on the grocery mart any minute.

Buildings were rocking back and forth. Chimneys were shaken down. A huge hole was in the center of main street. “What’s going on? ”, Thomas asked a nearby police officer. “San Francisco is in an earthquake!” replied the officer. Thomas was scared. There were cracks in the road and no window on the block had its glass intact. He searched the streets for people, but all he saw was masonry littering the streets and people on stretchers, being taken to the hospital, injured by the debris. 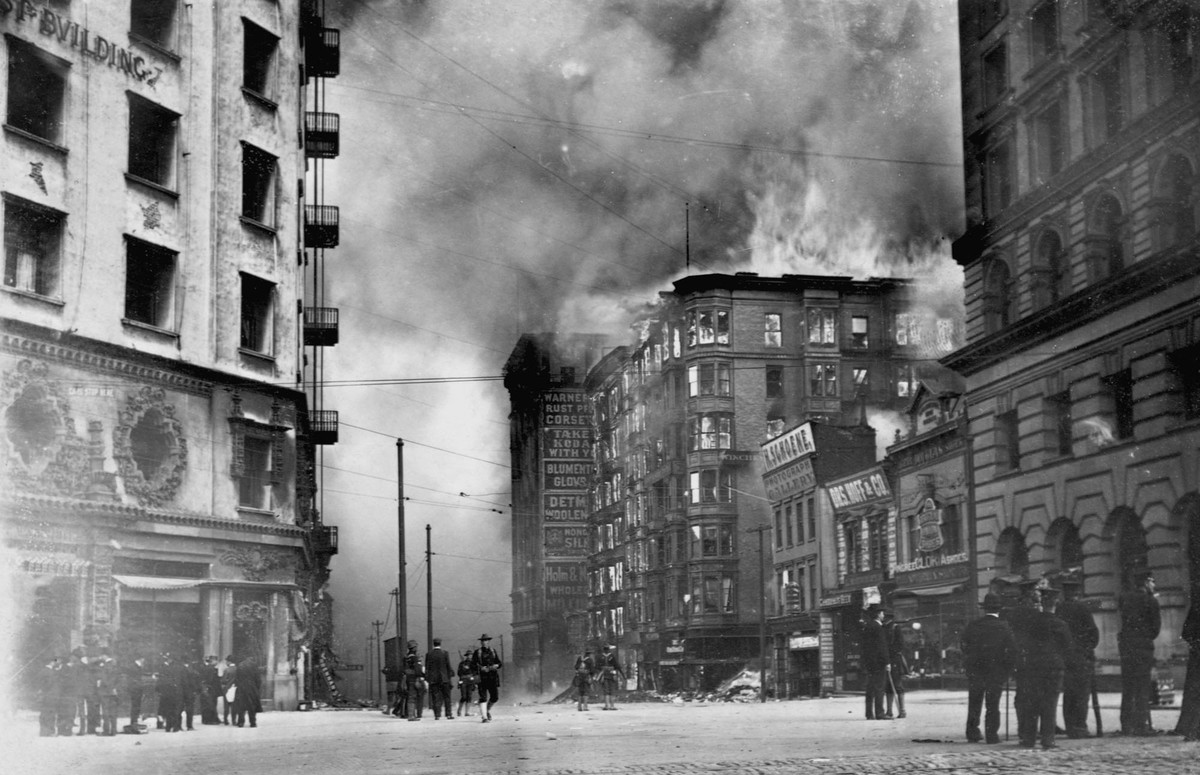 People watch as the Winchester Hotel burns in the aftermath of the 1906 San Francisco earthquake. The Hearst Building (left) was dynamited to use as a fire break between the fire and the rest of the city (Pic courtesy: The Atlantic)

He could see fires burning in the city. He ran back to his house, but when he reached there, many bricks in the walls were missing, the windows were broken, and there was rubble everywhere. Thomas went up to his bedroom, but his lamp was in shards and his clock was STILL not working.

He rushed outside again and met his neighbor.

“What is going on?” asked the neighbor.

“My cousin was supposed to visit me today, but how am I supposed to let him know that it’s not safe to come? ” asked the neighbor.

“I hear that the army is coming in to clear things up,” said Thomas.

“At least they are coming,” said the neighbor in exasperation.

“How is this mess going to be handled? ”

He and his neighbor began walking towards a nearby park. They could hear explosions from firefighters dynamiting big buildings, trying to demolish them. The water and gas mains had ruptured, so there was no water to put out the fires which spread quickly throughout the city. The artillery division was called in to help with containment of fires.

Thomas saw the military bringing in boxes of food for people in the neighborhood.

He also saw people being put onto stretchers and being taken away in the ambulances. The American Red Cross had come to help the wounded.

He saw many pipes running up houses broken, and water gushing out of them like a fountain. This water was not black in color and certainly not drinkable.

Thomas and his neighbor spotted a line in a park. People were jostling, frantically calling for food and water, and talking amongst themselves while they were lined up. Approaching the site, they realized it was a bread-line — to receive bread and food (relief) from the army. They got in line, way behind others, without any hope of procuring any bread from the relief operations. Since there was no alternative, they decided to wait and see what transpired.

Photograph of a Typical Bread Line in the Early Stages of Relief Distribution (Pic: Catalog.archives.gov)

A few hours passed in the line for bread when news spread that the army was putting up tents for people to sleep in the night. Thomas and his neighbor decided it was a wise option to stay in one, since their houses probably would have to be demolished and rebuilt. They made a bee- line for the tents and eventually managed to share one with a few other people.

Curled up in a sleeping bag inside the tent, they ruminated over the days events and hardly managed to close their eyes until exhaustion won over.

Photograph of a Military Camp on the Fourth Day After the 1906 San Francisco Earthquake (Pic: Catalog.archives.gov)

Facts about the earthquake: The 1906 earthquake was one of the most significant and destructive natural disasters of all time. It preceded the development of the Richter scale by about three decades, but scientists believe that the magnitude could have been somewhere between 7.7 to 8.3. Today its significance lies in the wealth of scientific knowledge that was obtained from the earthquake. The earthquake ruptured the San Andreas fault from northwest of San Juan Batista to triple junction at Cape Mendocino for about 296 miles. This earthquake caused Reid (1910) to propose the elastic rebound theory of earthquakes which is still in use today. It is said that the earthquake caused 700 deaths, but this number is now believed to be grossly underestimated.

The Unknown Heroes of New York

Diaries from a Post-Pandemic World

The Teen Who Saved a Kid By Giving His Life

Agneya Dutta Pooleery (2 Posts)
Visit My Blog
Agneya Dutta Pooleery is a fifth grade student at Country Parkway Elementary school in Buffalo, NY. He loves to read, write stories, make comics, play the guitar and piano, and hang out with his friends in the neighborhood.

A Place in the Stars
Poems

Make mistakes and learn from them.
More