Looking Back at Jaane Bhi Do Yaaro

A 1983 film made on a shoe-string budget of Rs.7 lakh, Jaane Bhi Do Yaaron hobbled and stumbled its way to its finish and later went on to become a cult film. 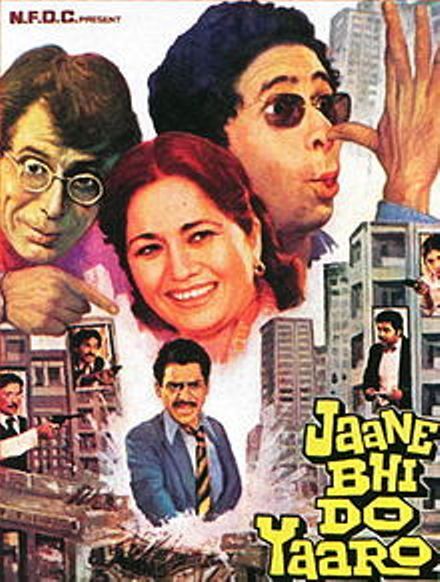 Why is Jaane Bhi Do Yaaron considered to be a cult film? By definition, a cult film, commonly referred to as a cult classic, is a film that has acquired a cult following with a specific group of fans. Cult films are often known to be eccentric, do not follow traditional standards of mainstream cinema and usually explore topics not considered in any way mainstream—yet there are examples that are relatively normal (Wikipedia).

In India, cult films are often defined by their initial failure to draw in packed theatres or be commercially successful but that acquire archival value among the same and following generations. Some examples of cult films in India are Mughal-e-Azam, Sholay – yes, that’s right, and Mera Naam Joker. They were turnips at the box office during the first week or two of their release. Mera Naam Joker did not pick up later but over time, all three have become the greatest cult films in the history of Indian cinema.

It is interesting to discover that Jaane Bhi Do Yaaro was a commercial failure when it was first released perhaps because in the ‘happily-ever-after’ ambience of that time, the ‘sad’ ending did not jell with audience expectations. Today, reality is admired and sad endings are considered more real than fiction and that is what large sections of the audience are fond of. Ishaqzade for instance, is a big hit inspite of, or perhaps because of its tragic end because the young audience took it as a reflection of life around us.”

Harper Collins India Limited published a book on the film in 2010 authored by Jai Arjun Singh a freelance journalist based in Delhi who later wrote a book in Hrishikesh Mukherjee. Jaane Bhi Do Yaaro is now a byword for the sort of absurdist, satirical humours that Hindi cinema just hasn’t seen enough of. This is the story of how it came to be despite incredible odds – and what it might have been. Jai Arjun Singh’s engaging take on the making of the film and its cult following is as entertaining as the film itself,” goes the blurb on the book.

If you have never seen a male corpse playing the role of Draupadi in Mahabharat or portraying Anarkali in the Salim-Anarkali love story, then please watch Kundan Shah’s cult classic Jaane Bhi Do Yaaro. A 1983 film made on a shoe-string budget of Rs.7 lakh, Jaane Bhi Do Yaaro hobbled and stumbled its way to its finish. The massive Y-generation that has bloomed in the world of the internet, YouTube and blogs, have watched, downloaded and replayed the film many times. 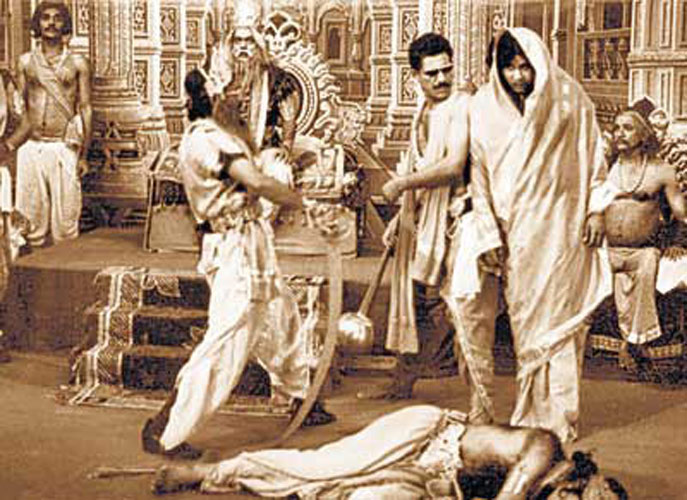 In an underplayed manner, the film focuses on failures more than on successes, on scamsters more than on honest people and on the changing meanings of honesty and corruption within the given scenario. The two protagonists are city bumpkins who cannot get a job right and begin to look for short-cuts to earning money. The story is straightforward, simple, narrated without any special gimmicks with side-splitting laughter all the way.

A photographer-duo, named Vinod Chopra and Sudhir Mishra – you can guess where the inspiration has come from – starts a studio, only to find wrong things happening from the moment of its launch. However, their photographic assignments lead them to shady facts about the city’s builders, municipal officers and others. Long before the linkages between and among real estate dealers, promoters, builders and municipal officers turned into headline news in the print media, this film exposed these underhand deals openly and in an extremely funny manner.

The film exposes the evils of real estate dealers and multi-millionnaire promoters, one of who named Tarneja (Pankaj Kapoor as a strapping and slim young man) who can mercilessly kill the corrupt but funny municipal commissioner who double crosses both. It throws the media in a shady light as well by portraying the double-dealing tactics of the lady editor Shobha (Bhakti Barve) of a paper with the double-entendre name of Khabardar. It has two meanings. In Hindi, khabardar means “Danger” and it also means “do not dare” and in this film, the newspaper suggests both! Through its hilarious style, Kundan Shah weaves into its narrative some slapstick comedy, and a wonderful version of the Mahabharat’s vastra-haran episode that becomes a comment on the dishonesty of life all around. A fictional ‘code’ for a phone call from an imaginary person is identified as ‘Albert Pinto Ko Gussa Kyon Ata Hai.’

The credits spell out a veritable Who’s Who of good Indian cinema and also evolves into an excellent promotional platform for the Film and Television Institute, Pune on the one hand and the National School of Drama, Delhi on the other. Most of the cast and crew are now household names not only in India but also beyond Indian shores. Naseeruddin Shah who portrayed Vinod Chopra said in an interview on a television channel that wherever he goes, be it to England, USA, Poland, Dubai, locals identify him with three films – Monsoon Wedding, Masoom and Jaane Bhi Do Yaaro.

Except for the late Ravi Vaswani who played Sudhir Mishra and bagged the Best Comedian Award from Filmfare, and the director Kundan Shah who bagged for this NFDC produced film the National Award, the others are now very famous wherever Indian cinema is popular. You can see a very slim Neena Gupta, a wig-wearing and slimmer Satish Kaushik, a slimmer Satish Shah as the alive and then dead Municipal Commissioner, Deepak Quazir, Om Puri, Rajesh Puri, Pankaj Kapoor, even Vidhu Vinod Chopra as Dushasana and Sudhir Mishra as a reporter. On the technical crew side, you have Vidhu Vinod Chopra, Sudhir Mishra, Vanraj Bhatia who wrote the music, Binod Pradhan who did the brilliant cinematography that reflected the moving cars on the glass panes of the photographic studio with its Black-and-White portraits, Renu Saluja who edited the film and Robin Das who was in charge of the very realistic art direction add to the archival quality of the film. Much of the locations were shot against a semi-circular backdrop of high-rises in Bombay in different stages of construction standing like a metaphor that suggests a trap that places everyone in a no-exit situation.

Writes Dheeraj Nayyar, senior editor with the Financial Express, “In many ways, the early ’80s were a period of directionless despair for the country. India was well past its idealistic period of socialism that had culminated in the disastrous Emergency. And yet, even after a period of the first non-Congress government at the Centre, there was no hope in sight. Indira Gandhi was voted back three years after she was voted out. The worst bits of India’s tryst with socialism — licence raj, corruption and crony capitalism —continued to hold sway. Economic liberalisation, opportunity and prosperity were a distant dream, even for a nascent middle class. Remember that for mainstream cinema this was also the time when Amitabh Bachchan’s anti-establishment “angry young man” character peaked in popularity, perhaps reflecting the mood of a somewhat frustrated nation.”

Anyone who has watched this black comedy-cum-satire-cum-political comment can never forget the climactic scene of the vastra-haran scene from the Mahabharat presented to a theatre audience within the film. Since the scene shows the corpse of the murdered commissioner ‘playing’ Draupadi, this is called vastra-cheeran because Duryodhana tries to tear ‘her’ sari instead of stripping it off ‘her.’ It is hilarious and even the in-screen audience laughs at the funny goings-on while Naseeruddin Shah steps on stage as Duryodhana and decides to ‘save the honour’ of Draupadi who is a chaste ‘Bharatiya Naari’ before the two villainous real estate promoters catch on to who the stage Draupadi is. While the goings on get more and more messed up, a different backdrop drops on the stage and the drama changes to a scene from the Salim-Anarkali romance with the corpse now playing Anarkali!

The cult status of the film is mainly due to the timelessness of story that is rooted in corruption in everyday life that does not permit two honest men to lead honest and respectable lives. It is also due to the wonderful, intelligent but simple humour that is not easily seen in contemporary Indian cinema and last but never the least, the longest and the liveliest dead body in world cinema.

More to read in Film Reviews

Shoma A Chatterji (51 Posts)
Visit My Blog
Dr. Shoma A Chatterji is a freelance journalist, film scholar and author based in Kolkata. Her focus of interest lies in Indian cinema, human rights, media, gender and child rights. She has authored 24 books mainly on Indian cinema and on gender and has been jury at several film festivals in India and abroad. She has won two National Awards - for Best Film Critic in 1991 and for Best Book on cinema in 2002. She has also won four fellowships over the past 10 years.

Majrooh Sultanpuri: The Poet For All Reasons — 'I Would Rate It As My Best Work,' Says Manek Premchand
Indian Film Personalities