Hirak Rajar Deshe: The Diamond King Had a Great Fall

Hirak Rajar Deshe (1980) is a film by our great filmmaker Satyajit Ray. This film is based on the story of the times when kings used to be dictators or ruled their kingdom as despots.

The king Hirak Raja believed in brainwashing the people who rebelled or posed as threats against him. So to avoid any type of trouble in his rule, he brought a scientist to invent a brainwashing machine which the scientist called ‘Mastishk Prakshalan Yantra’ (Brain Washing Machine). The king simplified the Sanskrit name to ‘Magaj Dholai’.

In this Magaj Dholai machine, people suspected of treason of any form would be shoved in. Once the machine was switched on, it would keep playing the words or rhyme or whatever the king wanted to make the people say in his glory. The machine would keep repeating these lines non-stop and it would soon get programmed into the minds of the people put inside the machine. They would memorise it by heart, and would keep repeating only those lines and they would neither be able to think anything else, nor speak differently. They would totally become the puppets of the king and his ministers. 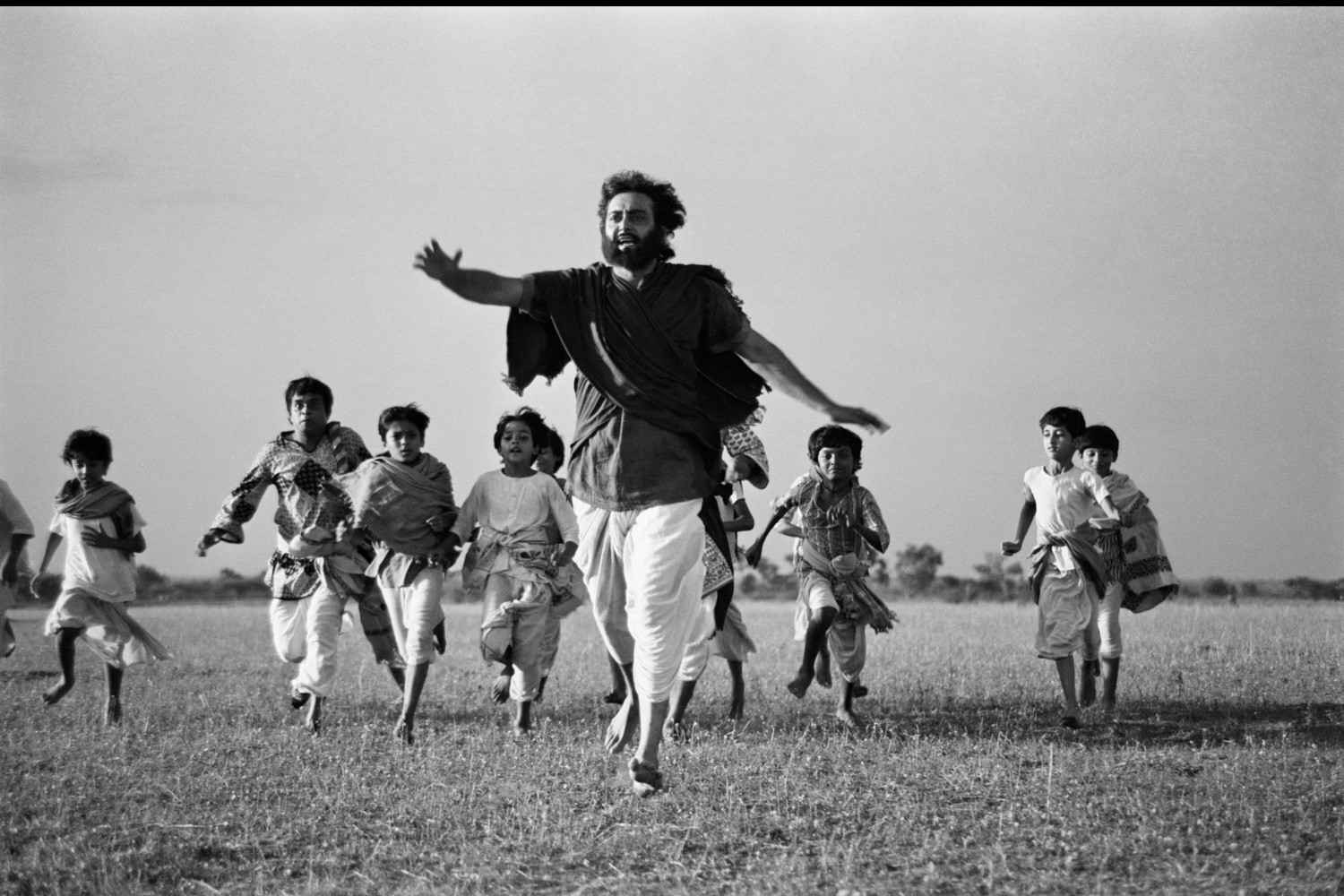 Udayan Pandit, the teacher and his students

In the whole of the kingdom there was just one person who rebelled against this despotism – the teacher whose little village school or pathshala the king had shut down so that there would be no education for the children. They wouldn’t learn anything. The king knew very well that education would allow them to think and question. That is what he did not want anyone to do.

But sometimes an evil person may fall into his own trap as well. In the court when all the guests and other kings invited by Hirak Raja were sitting with him, many poor peasants were brought in to celebrate his glory. There was a brainwashed peasant also present in the court and he started reciting the rhymes that had been programmed into his brain. He suddenly emerged from somewhere and started reciting the lines:

Jae jodi jaag pran Hirak er raja bhagoban.”
(Not paying the taxes is not at all a good job,

Even if you don’t get to eat to your fill, royal tax must be paid,
Even if we die, the King of Hirak is God.)

The king somehow managed to give the two guards a signal to pick the peasant and take him out of the scene.

Hirak Raja watches as the peasant sings his praise

Our Goopy Gyne and Bagha Byne were out on an adventure as they were bored being the pampered-with-nothing-to-do sons in law of the King of Shundi. They were also present at the royal court of Hirak Raja with the other kings. They asked the King about the peasant. The king somehow avoided answering the question directly and said, “Poor farmer! He works in the fields no, that’s why he sometimes acts mad.” Both Goopy and Bagha felt it to be odd and started to think what kind of a king Hirak was. The King definitely symbolised Hitler and other dictators from world history.

In another embarrassing situation for the King, Goopy and Bagha insisted on seeing the mines where all the labourers work.  The King didn’t like the request but agreed to show them the mines. There both of them asked the labourers, “Tomra ato kaaj kauro kaushto hoye na?” (You all work so much don’t you feel tired?). The labourers mouthed the rhymes they had been brainwashed to learn:

(One who works in the mines
the yam (god of death) also fears him,

There is no sorrow in starving, much eating makes you fat
Contribution of the labourer is great the King of Hirak is God)

After saying this all the labourers fall on the feet of the king.

Soumitra Chatterjee as the teacher

Ray also used a song by a wanderer who was also a singer to explain the whole kingdom Kotoi rongo dekhi duniya e.  Hearing this song the king got fire-eyed and ordered the singer to be thrown out in the forest with his hands, legs and mouth all tied up. Here too Goopy and Bagha take up the mission of revealing the secret of King Hirak and saving the kingdom from his dictatorship. They decided to cooperate with the teacher and all his students who want the dictatorship of the king to be finished. They met the teacher several times and made plans with him. The teacher advised them to loot the diamonds from the room where the freshly polished diamonds were stored. So that all the soldiers could be bribed and they could get their help too in this.

My most favourite scene in the film is when Goopy and Bagha somehow entered the room and found a graver trouble waiting for them there. They saw a huge tiger sitting in the room. It was guarding the chest which had the diamonds. Bagha then asked Goopy to sing and stop the tiger from moving so that he could open the box and take the diamonds.

Bagha pleaded, “Ga gaan gao” (Sing a song)” and then croaked “Gaan koi’ (where is the song)” when Goopy delayed in starting to sing. So poor Goopy had to sing to save their lives. He somehow started with Sa re ga, Sa ga ga, totally tuneless and shaking.

Bagha was also petrified of the tiger and helplessly exclaimed, “Sherechhe” (We are gone)!

After a few tries Goopy somehow built up his courage and managed to sing a song addressed to the tiger – “Paaye pori Baagh mama, koro na ko raag Mama, tumi je e ghore ke ta jaanto” (We fall at your feet Uncle Tiger, please don’t be angry. Who knew you were here in this room?).

Bagha now settled down comfortably and took his own sweet time to check the diamonds by their size, color, beauty and shine. On the other side poor Goopy not being able to sing forever poked Bagha to hurry up. Bagha then decided he had collected enough and they took the diamonds and escaped from the room as fast as possible. All along, the tiger kept a close watch on them, gently nodding its head but not able to move due to Goopy’s magical song. 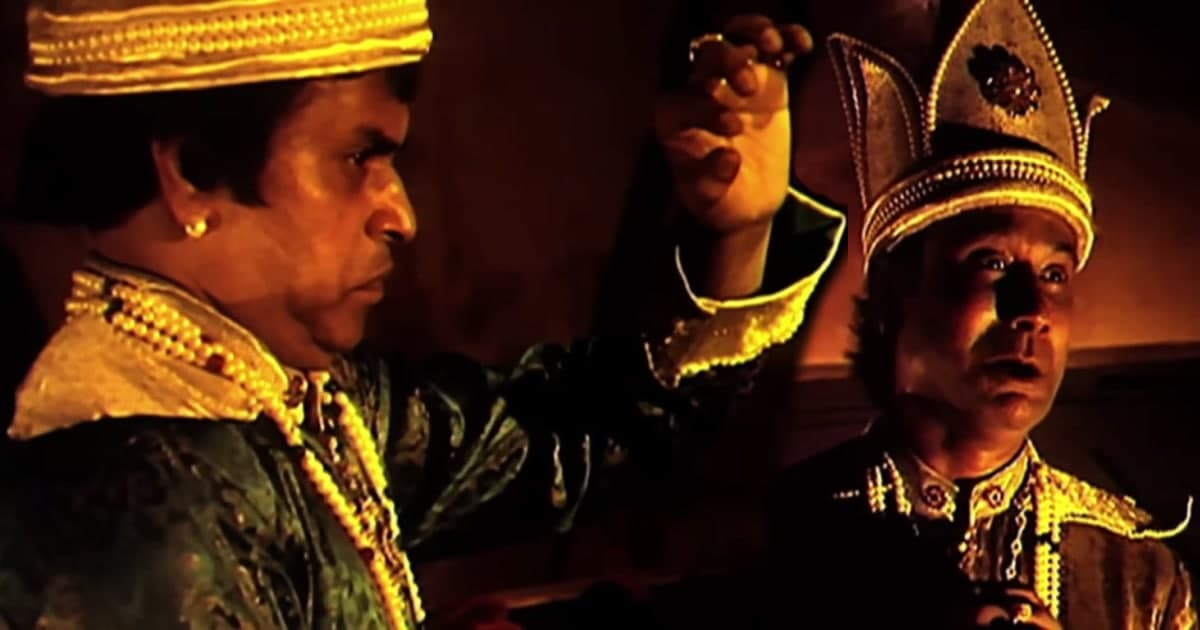 The film has its dialogues in rhymes that sound very funny. For instance, when the king gives the diamond necklaces to his ministers, he said,
“Esho ake ake montri shob,
tomra jader aami pushi
tomader kaje aami bodo khushi”
(Come my dear ministers, you all who are my pets have impressed me with your work!).

Or when Goopy and Bagha wondered what would happen when they age.

And then wondered, “Tirisher por shob daant hawa, kaimone hobe mangsho khawa” (All teeth are gone after thirty, how do you eat meat without teeth)

The scenes which I like the most are when the brainwashed peasant started to recite his rhymes and embarrass and worry the king. Also when in the beginning whatever the king said the ministers answered it with “Theek theek (Right right)”. Also the brainwashing machine or Magaj Dholai looked just like a cement mixing machine to me with a very funny yet scary face. The scene when our heroes Goopy and Bagha showed their magical powers to the teacher and promised to help him in this war of justice is another favourite.

The Diamond King finally had a great fall as he and his ministers too were brainwashed in the Magaj Dholai machine. So when the giant statue of the king was being brought down by the people, the king and all his ministers too joined in pulling the rope and fell down in a heap with the statue.

The things which were a little confusing for me were when Bagha came with the diamonds and all the soldiers were sitting on the ground doing nothing. Also when Goopy and Bagha untied the singer whom the king had punished the singer didn’t ask anything as to who they were or from where they had come. Also after Goopy ended his song in the Jantar Mantar Ghar (laboratory) no one asked what they were doing there. Everyone including the King just stared at them in shock.

Goopy Gyne Bagha Byne – The Story of the Kind Bravehearts

Mahapurush – A Film I Loved to Watch

Anshula (6 Posts)
Anshula, a student of ASN Sr Sec School, loves to draw and color, listen to soft music, watch good movies, read mythology and explore new places during her vacations. She has her own blog on Learning and Creativity and also writes in Silhouette Magazine.
All Posts of Anshula

6 thoughts on “Hirak Rajar Deshe: The Diamond King Had a Great Fall”

Anshula (6 Posts)
Visit My Blog
Anshula, a student of ASN Sr Sec School, loves to draw and color, listen to soft music, watch good movies, read mythology and explore new places during her vacations. She has her own blog on Learning and Creativity and also writes in Silhouette Magazine.